The Ferrari 488 GTS Has Been Spotted and it is Remarkable 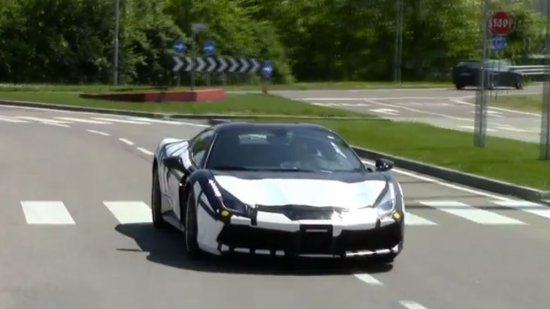 A convertible prototype of Ferrari’s 488 GTB has been spotted just outside the Italian giant’s headquarters in Maranello. The new car which will replace the eerily similar 458 Spider will supposedly be revealed in late 2015 or early 2016. In the video below you can see more than one possible prototypes but at this point it is nearly impossible to tell which features will stay in and get dropped. That could change closer to the release date which can still be more than a year away. What seems to be a sure thing is the engine, a twin-turbocharged 3.9-liter V-8.

We are also fairly certain that the retractable hardtop of the current Spider should find its way into the new design as well. The lightweight construction should be easy and quick to handle. The current Spider does its thing in no more than 14 seconds so we could be seeing something similar with the new GTS. Another aspect of the GTB that is not likely to be brought over is the naming process. The B in the GTB stands for Berlinetta which is a sporty form of coupe. They obviously cannot give that to the new car, which is the main reason why the letter B will probably be replaced with the S, which stands for Spider.