McLaren 650S Spider Collides with a Saab in London 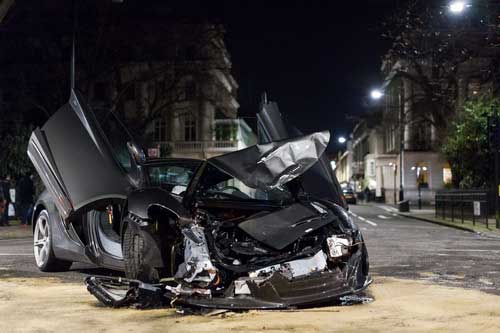 A McLaren 650S crashed into a Saab at the traffic lights in Central London’s Eaton Square. The crash left the £250,000 supercar crumpled on the street with debris scattered on the road.

According to authorities, the accident occurred on Saturday evening, 21st February, around 8:00pm in one of the high profile area of London, where the McLaren smashed head-on to a Saab after turning at a traffic light.

As a result of the collision, the expensive supercar was almost completely wrecked, strewing its expensive parts all over the road, as it swerved uncontrollably upon hitting the relatively inexpensive Saab. The McLaren is capable of achieving speeds as high as 124 mph in merely nine seconds on its way to a top speed of 200 mph, thanks to its 3.8-liter twin-turbocharged engine chugging out 640bhp.

The said McLaren was brand new, registered in Monaco, and the insurance company covering it now has to take care of the colossal bill.

The Saab convertible also suffered considerable damage to its front bumper and hood, but the damage was less severe compared to the McLaren’s suffering.

The airbags in both vehicles got activated on impact, which saved the lives of all passengers, and fortunately no injuries were reported after the devastating crash.