The Willy’s Jeepster – the Post-War Jeep 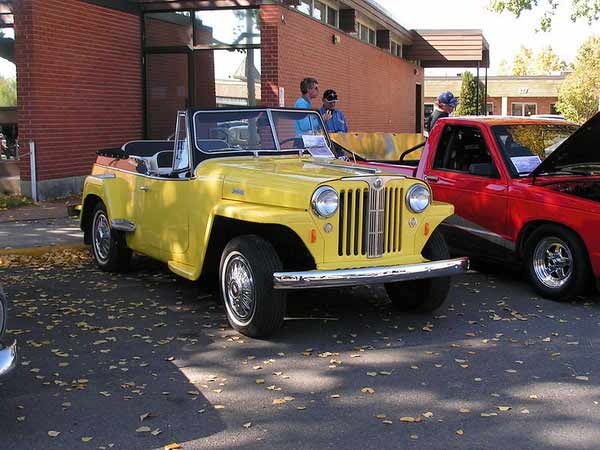 Willy’s Corporation was one of three companies involved in Jeep production during World War II. From 1941 until 1945, Willys built some 360,000 vehicles for the war effort. Not only did they profit financially during this time, they also accumulated further production knowledge during a time when most manufacturers were shut down.

After the war, Willys was eager to jump into the production of civilian vehicles to tap into near five years of pentup demand. The result was the new Willys Jeepster VJ-2 introduced to the public in July 1948. The base price of $1,765 for the VJ-2 included many features that were an extra cost on competitor’s cars, such as whitewall tires, hubcaps with bright trim rings, bumper guards, dual horns, cigar lighter, wind wings, top boot and a continental spare tire with cover. It was a good looking car too.

Unfortunately, sales were slow. Many of the 10,326 1948 Jeepsters were retitled as 1949 models and Willys-Overland soon realized that they needed to improve the Jeepster’s competitive position. Price was believed to be the greatest objection, so the 1949 Jeepster was released with a base price of $1,495.

An additional 1949 Jeepster powered by a new six-cylinder engine, the VJ3-6, was added to the lineup. It featured an L-head of 148.5 cid producing 72 bhp. Willys priced the six-cylinder Jeepster at $1,530. The result was that Jeepster sales picked up for a while, but production for 1949 totaled only 2,960 units. Of these, 2,307 were equipped with the four-cylinder engine and 653 with the new six.

There were two series of 1950 Jeepsters. Jeepsters carrying the new four-cylinder engine and revamped styling, including the new grill with 5 horizontal chrome bars, were designated VJ-473, while six-cylinder models were VJ-673. The total 1950 Jeepster production was 5,845 units, of which 4,066 were four-cylinder models and 1,779 were sixes. Even though production increased a bit, sales remained quite below expectations.

Poor marketing efforts and sparse advertising didn’t help to increase sales, so the decision was made to cease production of the Jeepster. Despite the 3 year production run from 1948 – 1950, the Jeepster never caught on with the general public. A total of just 19,131 Jeepsters were produced.

About the Jeep Wrangler Rubicon